'The Mandalorian' season finale has these famous fans psyched (NEW YORK) — The season two finale of Disney+ hit The Mandalorian is now available for streaming, and fans have been champing at the bit to see if Grogu — AKA Baby Yoda —  escapes the clutches of Giancarlo Esposito’s evil Moff Gideon.

Esposito was Emmy nominated for his performance as the villain, and he’s back in a big way in the finale, wielding the ancient — and pivotal — weapon known as the Darksaber. Esposito explains how excited he was to wield the weapon, which was also a major Easter egg for fans, in the finale of the first season: We see him crash his TIE fighter, ‘Oh, he could fly, too!'” he says with a laugh.

“And he comes out with the most phenomenal, unbelievable element that is such a throwback to the earlier movies, the Darksaber. And so now you’re really kind of drawn into who this guy is and what is the story.”

The Breaking Bad and Better Call Saul veteran adds, “It’s exciting to be a part of the story that so many people around the world can relate to and and be entertained by, but also be moved by the power of the theology that exists within our storyline.”

Oscar, Emmy, and Tony winner Lin-Manuel Miranda was such a Star Wars fan that he played an uncredited Rebel pilot in The Rise of Skywalker. The Force is strong in his family, he explains to ABC Audio.

“My son just turned six, and so we said when you turn six, you can watch the ‘real’ Star Wars movies as opposed to the LEGO Star Wars that he had already watched so many times, you couldn’t watch them anymore,” Miranda laughs.  “So we just finished Last Jedi…We just did 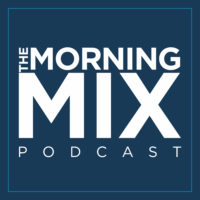 The Morning Mix After Show: In the Arms of an Angel

Listen to The Morning Mix weekdays from 5:30am - 10:00am on 101.9fm The Mix or with the free Mix App available in the Apple App Store and Google Play.

Morning Mixers shared when they had to tell people to stop doing it. We heard from Mixers who were sent to the principal's office for funny reasons, including selling Pokemon cards in the bathroom. Steve played a round of the Mix and Match Game. Which male celebrity would Chris, Nikki, Whip and Violeta want to have a beer with? Avatar 2 Continues To Dominate At The Box Office, Meghan Trainor With A Big Announcement, Rosa Linn Talks With The Afternoon Mix

Avatar 2 continues to dominate at the box office claiming the number one spot for a 7th weekend in a row. Meghan Trainor announced on her IG that "Baby #2 COMING THIS SUMMER." Singer/ songwriter Rosa Linn caught up the Afternoon Mix to talk about the success of her hit song SNAP, music inspirations and heading out on tour with Ed Sheeran (full interview at wtmx.com).
More Podcasts
4, 5, 6, 7 and 8. And then my wife and I are watching Mandalorian after they go to sleep.”

Brian Volk-Weiss is a super-fan, as well as the producer of Netflix’s hit shows The Movies That Made Us and The Toys That Made Us. He explained how The Mandalorian brings to life toys hardcore fans had as a child, and that they clamor to collect as adults. The sight of one obscure toy onscreen, the Imperial Troop Transport, got him emotional.

Volk-Weiss adds, “We are living in the greatest time in history to be a geek.”