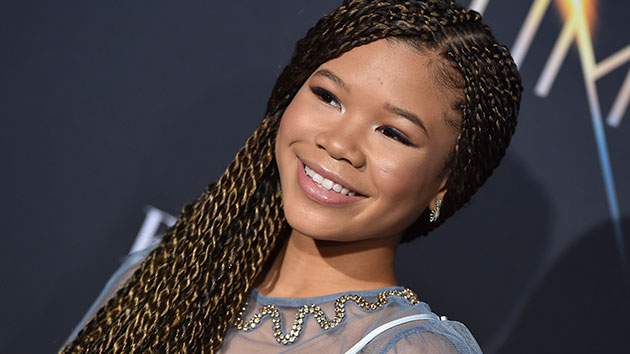 (LOS ANGELES) — Storm Reid is opening up about some of the backlash she faced when starring in the 2018 Disney movie A Wrinkle in Time.

In an interview with InStyle magazine, Reid, who was cast as protagonist Meg in the film, said she encountered racist Internet trolls following the announcement that she’d been cast.

“Some people had problems with me playing Meg because they’d loved her as a Caucasian girl for so long,” said Reid. “They were uncomfortable to have that shift, but the only way to create change in our world is through people willing to be uncomfortable.”

However, the Euphoria actress noted that with some of the initial negativity, there was also plenty of heart-warming praise from young fans.

“When the film came out, little girls would come up to me and say, ‘Thank you for allowing me to see a girl who looks like me save the world,’ ” she said. “That’s when I realized my career was bigger than myself.”

Based on the classic 1962 novel by Madeleine L’Engle, A Wrinkle in Time, directed by Ava Duvernay, also starred Reese Witherspoon, Mindy Kaling and Oprah Winfrey. Reid said it made it big difference knowing she had four Hollywood role models supporting her.

“It’s a blessing to have amazing women like Ms. Ava, Ms. Reese, Ms. Mindy, and Ms. Oprah in my corner championing me,” she said. “I try to make them proud, but I know I’m not always going to do or say everything the right way. I’m not perfect, but the goal shouldn’t be for me to be perfect.”

The November issue of InStyle, featuring Storm Reid, is available on newsstands and digitally on October 23.