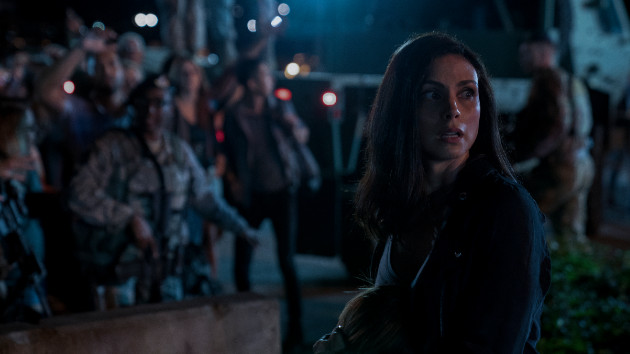 In the film, Baccarin plays Allison Garrity, a mother and the estranged wife of a structural engineer handpicked by the government to survive the impending global disaster. Baccarin tells ABC Audio that the action-packed drama could have been taken from a page out of 2020.

“I mean the only thing 2020 doesn’t have right now is a comet or asteroid disaster, but there’s still time,” she laughs.

“[But,] I feel like this movie really spoke to me because of its adrenaline pace,” Baccarin continues. “I thought it was a really thrilling ride, but it was so deeply rooted in reality. And what would actually be happening to people if that was going on.”

Unlike other disaster films, Baccarin says Greenland did its best to stray away from the usual tropes like the “sexy scientist in the corner figuring out how to save the world.”

“It was a real family striving to survive and to save each other,” she says. “And I loved the relationship between the three of them — [that] it was complicated, that it was messy, and that a lot of really terrible stuff happened.”