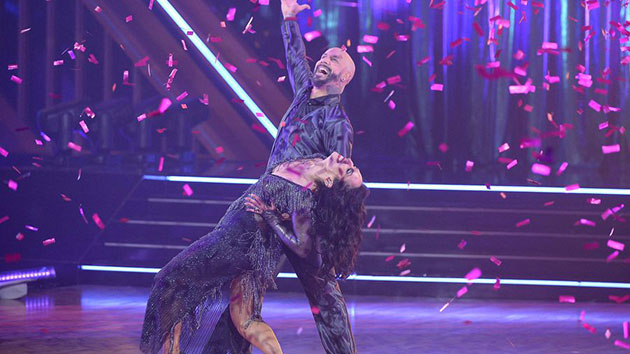 Emotions were riding high on night two of Dancing with the Stars when the reality competition announced the first elimination of the season.

However, the biggest tearjerker of the night happened way before — when AJ McLean openly professed his undying love to his wife of nine years, Rochelle.

The Backstreet Boy also shared their adorable history, revealing that the two met in 2006, but their first date didn’t happen until a full year later.

McLean said he first laid eyes on Rochelle when she was a Hollywood waitress and “asked her out.”  But, instead of winning her over right then and there, she flatly rejected him and chose to go have fun with her friends instead.

Undeterred, the 42-year-old said he tried his luck a year later and the rest was history.

“Baby, this one is for you,” McLean said aloud before performing a smooth and flirtatious foxtrot to “Ain’t That a Kick in the Head.”

As it turns out, the song holds a very special meaning to the singer, which explains why he gave his all on the ballroom floor and earned high marks from the judges who enthusiastically sang his praises.

Judge Derek Hough lauded, “You’re such a showman. All the joy coming off of you, fantastic.”

However, the tears started flowing when host Tyra Banks pressed McLean to open up about the love he has for Rochelle.

In response to Banks’ question about why he waited a whole year to ask her out on a date, the Backstreet Boy tenderly replied, “You know when you know.”

However, his voice swelled with emotion as he continued, “True love is actually out there. I found it. I love you.”

Voice crackling, McLean continued to gush, “I love you, baby” and called her “my superhero.”